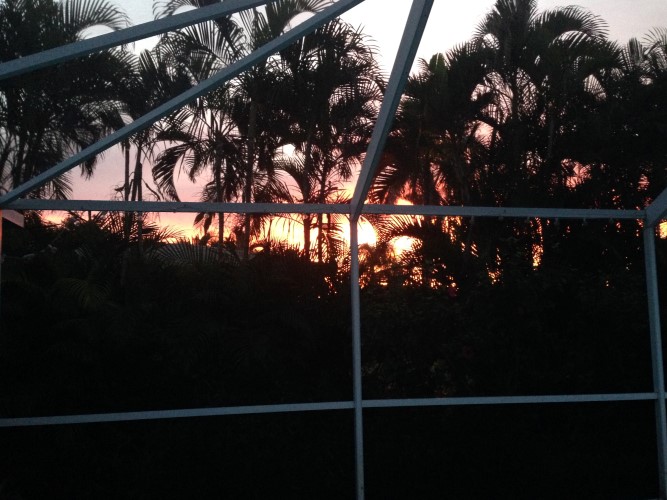 In Florida we don’t have porches or patios, we have lanais. Down here, lanais are the generic term for “all-that-stuff-out-back” that’s attached to the house. This word is borrowed from the Hawaiian word for, well, “porch,” so it’s unpretentiously Native American. In essence, a lanai is sort of an open-air exterior room, more or less: an extension to the house where you can hang out and talk about the heat, the help and home improvement: the “Florida-3-Hs.” Floridians are constantly working on their homes, so adding something like a garish three-story cage over a pool makes an ideal human habitat project for the warmth-reveler. 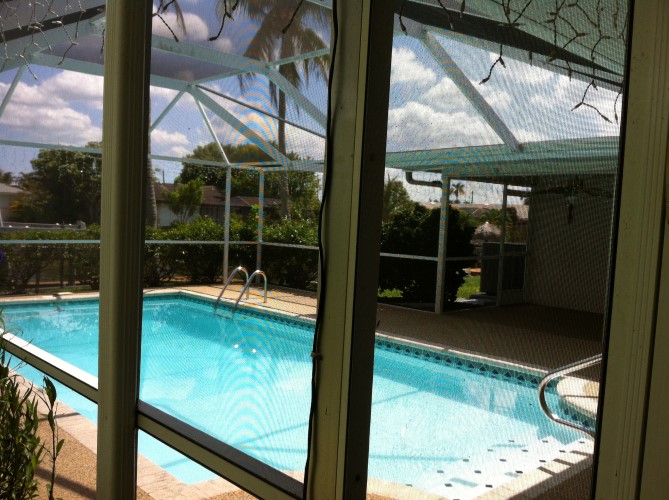 I haven’t seen a lanai with actual drapes, except at resorts catering to newlyweds. Newlyweds don’t have gray hair; honeymooners don’t hang out in public much either; they’re far too busy doing newlywed things.

There’s evidently no mildew there either.

On your lanai, you should know it will be 92 degrees in the summertime, no matter what. One can be out on the lanai when it rains, at slightly cooler temperatures, which is nice. Unfortunately there’s higher humidity too, so there’s a trade-off. The porch section of the lanai should protect you from that light rain but the screened-in lanai atomizes the rain so it’s more like applying a perfume called “Irish Bog.” But sitting just out of the rain and watching it come down on the pool is the next best thing to watching it come down on the ocean, except you’re semi-wet – and a magnet for lightning. But it’s worth it.

In winter, those relocating will learn the lanai is sublime. 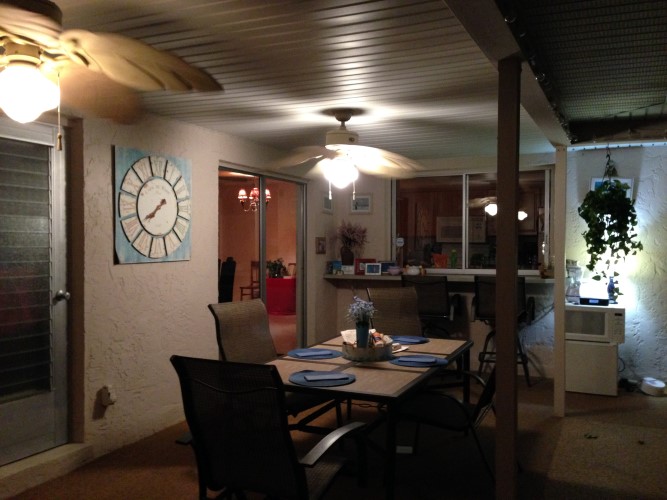 Technically, the lanai is just the portion with an overhang. Further attachments are screened-in lanais, or so-called pool cages, if you have a pool too. Otherwise, they’re called “people-cages.” Homeowners almost always use “lanai.”

Architecturally, they look a lot like a wildlife exhibit at the zoo; or kind of a like the Louvre. I guess it depends upon your perspective. Some hang Christmas lights all year to add to the effect. 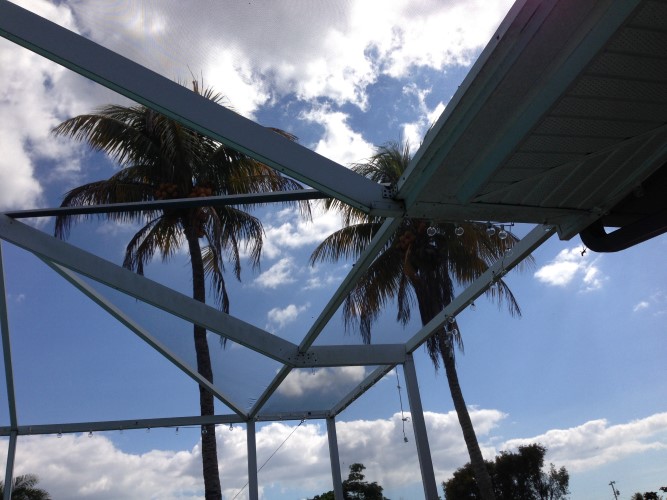 Nonetheless, mosquitoes are really ticked-off about these cages. They are so ticked off they have evidently formed a clandestine group of disgruntled mosquitoes into a resistance league. These mosquitoes infiltrate the cracks in your pool cage and attack at night – much like the French revolutionaries during WW2. Instead of blowing up a bridge, they leave three-day red bumps around your nostrils that you scratch until they look like boogers and embarrass you in front of all your co-workers. “Avez vous une crotte da nez? Ha, ha! C’est la vengeance!”

“In season” the lanai is the place you hang-out, drink wine and socialize. Most people don’t swim in the wintertime because they have to kick the pool heater on. It’s a pain. Pool heaters are actually heat-pumps and are about a subtle as a jet engine with a cat in it. There’s nothing like a bunch of hard-of-hearing folks going, “Huh… what? Did you say you want another glass of pine? Pine? Are you drunk? Sounds terrible.”

If it’s 55 degrees in the morning and 80 degrees in the afternoon, it makes the water’s mean temperature 68 degrees, at best, by day’s end. That’s still a bit nipple-y for swimming, and a lot of heat-pumping is needed to climb to 85 degrees. That’s where the beach water stays in the summertime. It takes several hours, so you might as well go to the beach while you wait.

Another mandatory piece of equipment for the lanai is the barbecue. Yes, some folks have full-blown kitchens out there, but these people are weird, or rich, but usually both.

It’s not a particularly good idea to barbecue inside the lanai, not because it’s a true fire hazard, per se, but because it makes the neighbors think your house is on fire. I would still think it best not run the risk of sparks potentially catching in the screen, however. I’m sure the fire departments love it when the snowbirds arrive in the fall and start firing up their grills. “Ma’am, we don’t take kindly to being called away from taco night at the station. That said, we’ve finished treating your husband’s singed eyebrows; they should grow back, but he’ll look like a doorknob for a while.”

In truth, the carbon from the smoke clings to the lanai screen. After the next rain, your pool will look like Satan took a bath in it, dirty feet and all.

That about covers the whole “lanai” experience in Florida. Not everyone can afford the whole lanai experience. Some of us just pull over on a sandy key, pull the tailgate down, crack a beer — and open a party tent.

And still true for others, they have the front porch.