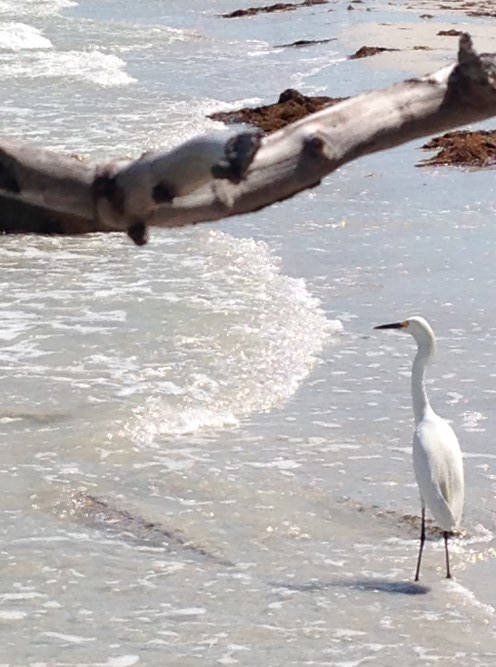 The Bigger Birds of Florida

Florida is known for its wildlife. Of course, alligators, crocodiles, sea turtles, and manatees get most of the press, but unless you actively seek these animals, seeing them is not as likely as you might think. But what you do see, and also what makes Florida truly outstanding, are the birds. If you are from up north, you don’t see a great many birds that are nearly all white in color, yet here in Florida, they are abundant and you will see them daily. Here are a few Florida birds you’re unlikely to encounter outside the warm ocean-rimming states, and a few you might.

But this article is not about songbirds; it’s about Florida’s iconic birds. We’ll cover the major beach birds in another article too. Although all these birds can be found at the beach as well, usually around a tide pool. I’m grouping them by color and size rather than family because I tend to think of them that way: the white birds, the big birds, and so on. 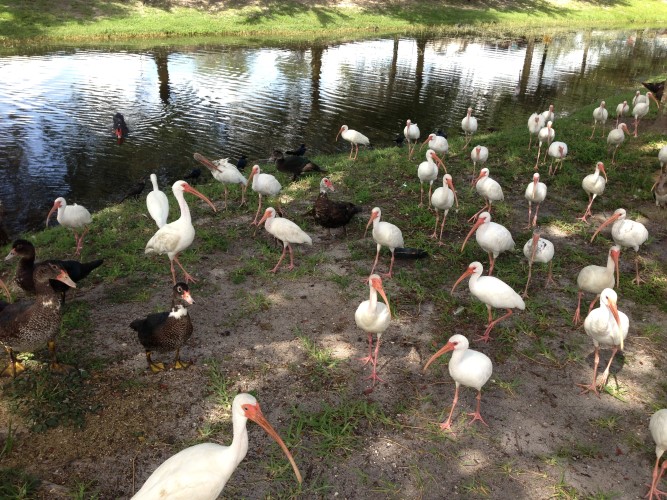 Ibis hanging out with the ducks. Photo: Copyright 2016 Kelly Dean

You are as likely to see a white Ibis as you are to see a mockingbird or cardinal in Florida. This usually white bird is found in flocks road-side picking up insects from the grass. They have curved orange-yellow beaks, shorter legs and fly with their neck straight out, as not to be confused with the taller straight-beaked Egret, which cocks its longer, curved neck when it flies. When people first visit here they fill the smartphone with pictures of these white “Florida chickens” pecking their way around in unlikely places.

Ibis are most likely in a small flock and will show up anywhere for the most mundane of reasons, like after mowing your lawn, from which they evidently pick up an abundance of insects. As a flock, they frequently do things in tandem one wouldn’t expect, such as having a party in your neighbors backyard or dock for no apparent reason. Ibis will create a line-up along a power line outside your house, like a Hitchcock movie, waiting for the sun to set, apparently. 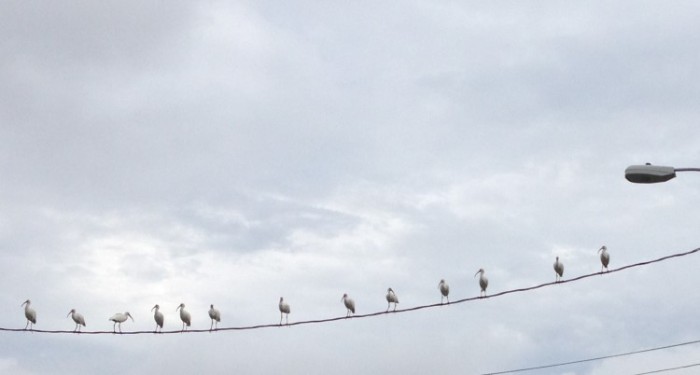 A special treat is when you see an Ibis with red, black or multi-mottled coloring. The pink Spoonbill is also a member of this family and an eye-catcher at wildlife parks.

Ibis are completely unobtrusive and still catch the eye of anyone living in Florida, regardless of how long they’ve lived here. If there’s ever a new selection for the bird of Florida, certainly, the Ibis should be on that list, rather than the northern mockingbird (an interesting but annoying bird, if you ask me).

You will likely see the white Egret varieties a bit less often than the white Ibis if you relocate to Florida, but you will see them often. They are frequently alone, but they are noteworthy indeed. There are several varieties in Florida, including some that are not white (the Great Blue Heron is technically an egret). They simply show up near water pools after a rain, standing guard over their puddle. As mentioned earlier, egrets cock their curvy neck when they fly, which makes them stand out as graceful birds. The white variety are taller and larger than an ibis, with a straight yellow beak and some varieties have a tuft on top their head when mad.

When I accidentally come upon an Egret near a puddle, I can’t help but stop and notice. They are an elegant treat, where Ibis are ubiquitous icon. Both are wonderful ambassadors. 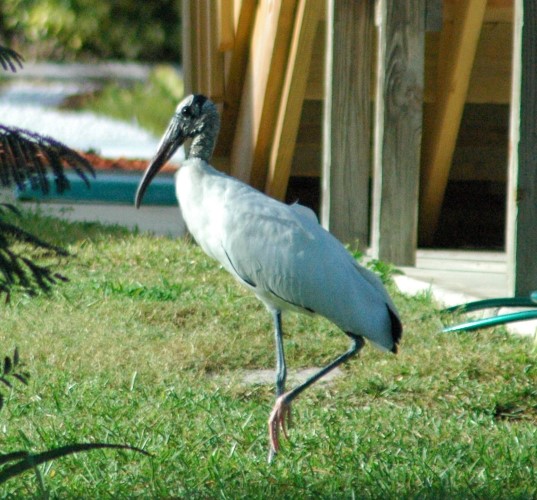 Yes, the wood stork has a face only a mother could love, but they are graceful, elegant birds. I see them more in the bay areas and inland lakes than at the ocean, but that isn’t a scientific observation, just my experience. If you get an opportunity to watch one, relish it. 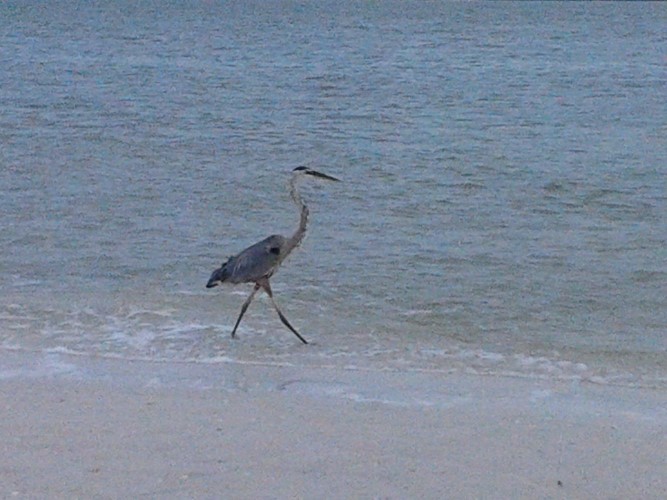 The Big Birds: Heron and Crane

Although these birds are most easily spotted near lakes and ocean pools, they are quite visible in Florida, despite being rare elsewhere. Certainly you won’t see them as much as the Ibis or Egret, but they can be spotted pretty easily on less-populated beaches, freshwater ponds and lakes, and at bird sanctuaries. 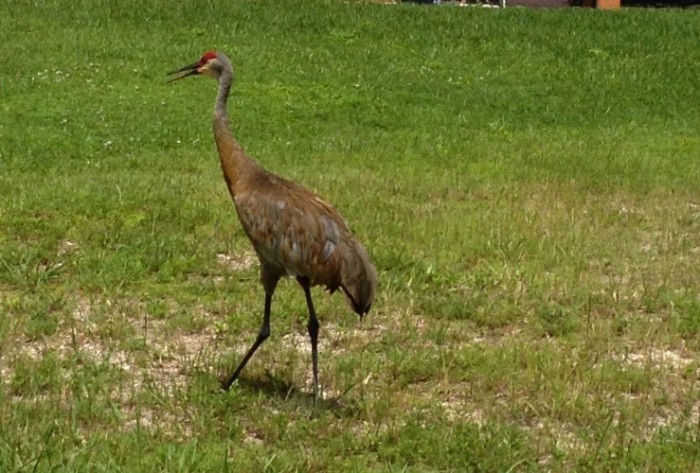 Yet, like all Florida big birds, large Sandhill Cranes and Great Blue Herons can surprise you with an appearance wading near water-filled ditches or overflows, so long as something tasty has managed to wash into the pools. Cranes and Herons are unrelated, as a Blue Heron is actually a large member of the egret family.

These birds are large and often confused with one another from a distance simply due to their larger size and color variations.

By and large, the white Whooping Crane is white when an adult but not when young and sports a black and red bandit’s mask. They are quite rare. The Blue Heron is gray to blue and is wearing a black, white and gray bandit’s mask and often a short ponytail. There is a white variety too with a yellow beak, fitting in well with its egret family but making the Blue Heron even more confusing.

Nevertheless, cranes fly with their necks elongated, like the ibis, rather than cocked back like the egret family. 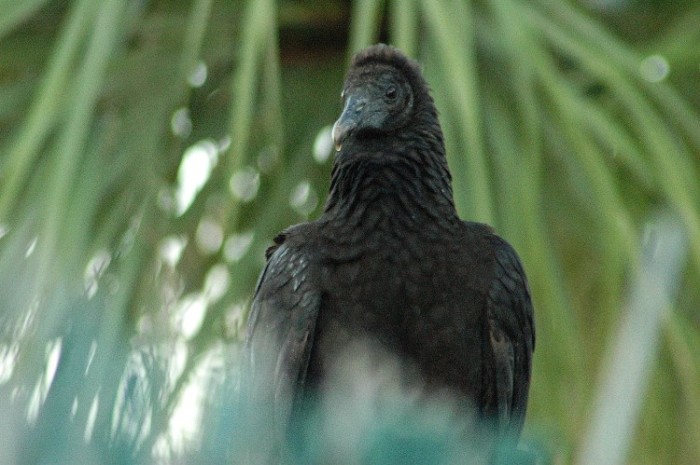 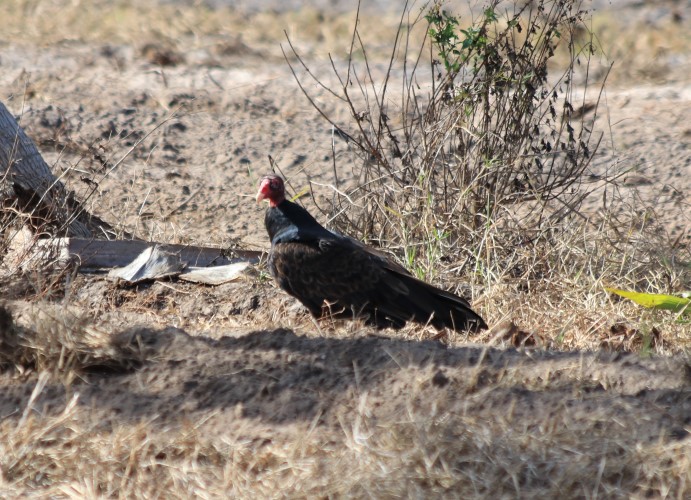 Up north, seeing hawks, owls and buzzards was a rare occurrence, unless you lived in the rural areas, but even then, it was an evening treat that happened only once in a while. In Florida, however, these birds have no problem living among human beings. In a state abundant in wildlife, these small critter-eaters flourish among the never-ending supply of mice, snakes, opossum and rabbits. I’ve seen a hawk attack a small pet (word to the wise). But most frequently, they are flying low, carrying a fish they’ve caught from a nearby canal, pond or lake. Although Bald Eagles are also abundant in Florida, at least one hawk stands sentry over every neighborhood in Florida. 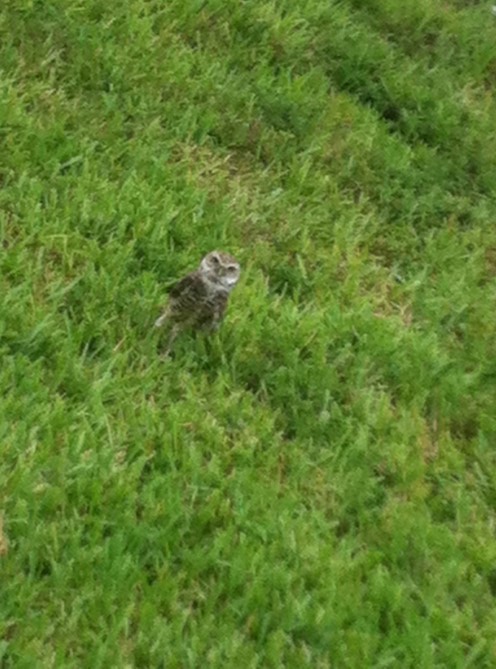 Owls, some small varieties living in the ground in Florida, are most active at dusk but have no problem hanging out in the day on a vacant lot. These catch you by surprise when you’re driving down the street at night. Appearing out of your periphery, they can startle a driver, like an oncoming car that’s emerged from nowhere – and this is on a residential street. Owls are endearing, but it isn’t because they are timid about anything. Otherwise, people wouldn’t use their stuffed effigy on their property to keep pooper birds off their docks.

Like everywhere, buzzards, or Turkey and Black Vultures, are an under-appreciated bird – and always have been. They eat dead things and that makes them unpopular (as if people don’t eat dead things — odd). The buzzard has to be the unofficial king in the meat-eater disposal business. 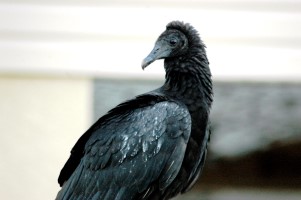 I was taking an evening walk and came across a flock of bad guys “performing funeral services” next to the road. As I approached, I could tell they were sizing me up to see if I was a potential meal. I was looking to see what they were eating. I can be macabre that way. When I got close enough, it turned out to be another buzzard. The only thing left was a foot, hanging from the beak of a brother. Yikes, that’s pretty bad-ass.

Florida birds might not be that unique to Floridians, once they’ve lived here for a while, but they are certainly impressive to anyone who grew up watching Miami Vice up north. They are something special and add to the tropical experience each day. I can hear that show’s theme in my head right now; it will be stuck in my head all day, in fact.