My son loves jambalaya. He frequently comes home from college asking for it, and I am happy to oblige him. But like all youngsters, he isn’t blessed with patience. For that reason, I have developed a couple of shortcuts that create terrific jambalaya without all the time involved.

In the day, poor folks only owned one large stew pot, generally a Dutch oven. This made the one-pot-meal necessary, and this is how jambalaya was born. But today the average home has more than one pot, and we take advantage of it daily. This particular recipe uses a stewpot, a saute pan for shrimp and a sauce pan for the rice.

So my jambalaya recipe is designed to be faster to make than traditional jambalaya. If it’s quicker without appreciably affecting taste, I’m all for it. It’s also a hybrid – served gumbo style — and it’s Creole inspired.

But like all Creole cooking, it has lots of ingredients and options due to garden availability and a myriad immigrant influences. Hopefully, I’ve listed enough of these options to feel good about making it, rather than perplexed.

Stylistically, use of tomatoes technically leans the dish toward Creole (red jambalaya), as opposed to Cajun jambalaya, which does not have tomatoes. Generally, Creole is city food. Cajun is country food.

Cajun jambalaya and gumbo almost always has a “mystery meat,” such as other fish, chicken, beef, wildfowl, pork, sausage or even alligator — whatever is available – and no tomato. Subtle tweaks exist, such as those below.

Despite what most people think, not all Creole and Cajun cooking is spicy hot either, especially not Creole.

Jambalaya is a thick, reduced, low-moisture mess with sausage and usually shrimp or chicken and rice.

Gumbo is a soupy stew with a smoked animal fat base thickening roux – with an added mystery meat, also generally smoked. It’s made into a thick soup with file’ spicing and served in a bowl over separate rice. They have many similar ingredients but are not prepared the same and don’t taste or look the same, except for the rice.

In a stewpot on low, add the smoked bacon grease and sausage pieces and lightly brown meat on low sizzle-heat for about 10-15 minutes. Do not over-brown. After the sausage is slightly browned, add the Cajun-Creole holy trinity: celery, onions, and bell pepper assortment. These can be sloppy-cut directly into the pan, starting with celery, then bells, then onion, thus saving time.

Add minced garlic (save a half-teaspoon for shrimp saute), add optional mushrooms, add splash of water and set stove at the lowest possible heat that will make a slight sizzle-boil, 30-35 % of stove heat settings, producing a thin but constant steam from under the lid. Checking sparingly every ten minutes or so to stir or add splashes of water, and/or a dash of Worcestershire sauce to avert sticking.

This will create your quasi-mirepoix: a low-heat veggie moisture reduction that increases the sweetness, builds a rich stock, but maintains each individual flavor identity — not browned or gooey. Veggies cook in their own fluids. A good mirepoix added to the natural juice of tomatoes creates a concentrated stock that’s better than adding a thin external stock from a box.

Do not add tomato-based ingredients yet. The citrus in tomatoes slows the cooking of other vegetables.

Start rice in separate pan per instructions below if you are not using instant rice.

Once you’ve added the vegetables, continue cooking covered at this very low, light-boil heat until onions, peppers and celery are soft, especially the celery. Check and stir the first time at about 25 minutes post simmer, then every 5 minutes thereafter.

Splash and stir-in only enough water (or Worcestershire sauce) as is needed to keep the mix moist — and avert over-sticking — until veggies are soft and shiny but not caramelized. Slight browning is acceptable. The very small amount of moisture at the bottom will thicken slightly as well. Keep covered. A lovely, savory mess is always desirable – but watery is not.

This is where I diverge from tradition. Usually, we would add the shrimp here — and conventional rice and stock near the end — eventually creating an iron kettle, one-pot meal. Adding fresh, raw shrimp this early in the mess will increase the moisture considerably, requiring additional fluid reduction through light boiling — and rice absorption.

This lessens the “trinity” mirepoix flavors (or at least, doesn’t benefit them), and adds considerable time. Further, adding external stock to the pot to hydrate the rice seems counterintuitive and unnecessary, especially with a good, rich mirepoix base and tomatoes.

So this leaves three choices:

Back to the recipe …

Steam shrimp in a covered omelet pan with a splash of water to first reduce it. Shrimp will shrink. Pour resulting shrimp juice in a cup and save for splashes, to help hydrate rice, or other moisture. Add 2 T butter, remaining garlic and saute shrimp on low heat until golden. Set aside.

If you are adding the previously sautéed or steamed shrimp, add it to the mess now and stir. Add the can of chilies, one-half of the parsley, the optional hot chili peppers, the Worcestershire sauce, and all remaining seasonings. Splash water if necessary but do not make watery. Let the mix simmer, covered another 15-20 minutes until moisture is largely depleted.

When everything is consistent and unified, working quickly, add ½ can of diced tomatoes to the mess and quickly stir. Taste. If you like more tartness, add the rest of the can of tomatoes and adjust your seasonings to your taste. Cover, turn off heat, and let it steam-warm the tomatoes without over-cooking them, adding a tartness, texture and freshness. The small amount of tomato juice, along with the previously added chili powder darkens the remaining fluids. 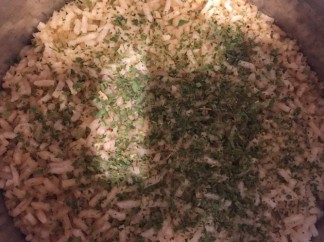 If you didn’t make conventional rice while the other pot simmered, do so in a separate saucepan, prepare the instant rice according to directions. Add any shrimp juice, half of the parsley to the rice pan just before bringing to a boil, saving a pinch for the top when done — turn off heat, add the dry rice and cover for moisture-absorbing. Hydrate covered for 5-10 minutes.

On a plate, scoop the jambalaya mix over a bed of rice, half and half — in gumbo style. In this recipe version, I do not cook or pre-mix the two in one pot as is traditionally done with jambalaya for the time reasons mentioned.

At about 6 total cups, this recipe serves about three hearty eaters as a one-dish entrée. Or it serves about six people as a side dish. It takes under an hour to cook if you double-task.