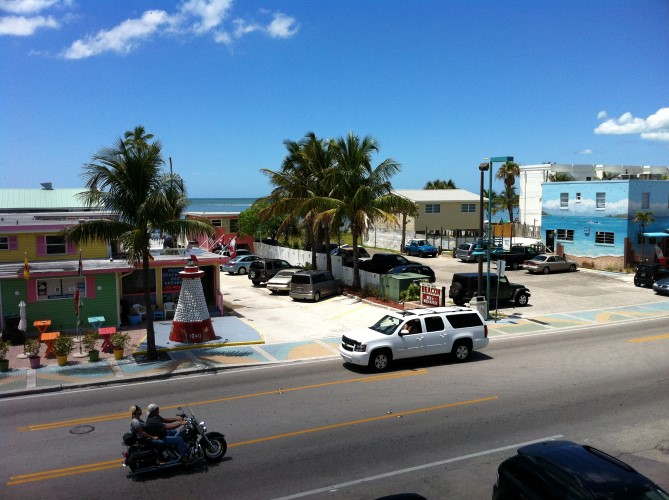 Most Florida folks are not from here originally. They come from other states and countries and they seek the wintertime warmth of Florida. But not everything is sun and beaches, sunrises and sunsets. People drive around in cars here, yeah, and they can be a menace.

Some of the most shadowy thoughts I’ve ever thought have been about bad drivers: The concept of road rage becomes somewhat blurry, sort of a gray area now, worthy of debate — rather than being a bad thing all together. Oh, I know you think about it too.

I wonder what people did before the car horn was invented. Was there some interesting way for people to make their horses cough, or snort, or fart or something when other buggy drivers cut them off at the crick? I ask because some people cannot get their hands off the car horn and I’ve never seen it quite as bad as I’ve seen it in Florida during season, except perhaps New York City during — anytime. Wait a minute, could there be a correlation?

I know where many people come from – duh, the north. But I also came from the north and we rarely if ever honked our horn in the Midwest; in fact, my local driver’s manual expressly states the horn is to be used for emergencies only. Well if that’s the case in Florida, taking too long to relinquish a parking place at Publix is an emergency; driving too slow is an emergency; and not running a red signal is an emergency. Does everyone need to go to the bathroom suddenly?

Honking your horn at somebody for honking their horn is paradoxical, but I’ve heard people do it and it might be appropriate, usually accompanied by a certain finger.

When you pull up to a traffic light, for some reason, there is always someone who leaves an extra space between their car and the one in front of them. I’m thinking, why? Is there a possible likelihood a circus parade might come by and the elephants might need the extra room? Why do this? When anyone in front of you does this, and you happen to be the last guy in the row, you are going to miss the signal and have to wait through another cycle.

That’s 5-minutes of your life you’ll never see again, just like smoking a cigarette or eating a slice of bacon.

Oh, I’m sure I’m the first to lament about the cell phone drivers. It is incredibly important that whomever you are replying to on Facebook receives that astounding “LOL” retort you are sending to them, meanwhile, forcing me to wait through yet another mercurial traffic signal because you didn’t notice the LIGHT TURNED GREEN!

Folks, if you make someone miss a signal because you are on your phone, you are a jerk. If that is not in the dictionary, it should be. Whether you are texting or catching up on emails, it has little to do with me, so why make me eat another slice of bacon when the ol’ cholesterol is already high.

If a driver is extremely inconsiderate, he will pull out into a median area that doesn’t have adequate room to let oncoming traffic go by, like hell’s on-deck circle, thereby stopping all cross-traffic. Unless we want to t-bone this guy in the side, the whole column of traffic must stop, both ways.

The median-blocker guy is one of the worst and obviously doesn’t care who he impedes. I take a quiet moment to cuss and in lieu of honking, I will fantasize about pulling this guy out of his car and slapping him though. I will just fantasize, really.

If there is someone who irritates me the most, it would be the I-will-kill-you-before-I-let-you-merge-in-front-of-me guy. How horrible are you if you think losing 15 feet on the way to your destination is worth driving another off the road — or worse yet, into a barrier or something?

If there’s plenty of room behind you that’s different, but that guy won’t let you in either. Why, because the first guy is supposed to let you in? This self-righteous, back and forth one-upmanship continues until you suddenly start feeling those bumpy road indicators under your tires on the side of the road, then grass and rocks hitting your wheel wells, then the soft splashy sound of a water-filled ditch, then an ibis is sitting on your hood.

I will very likely honk at this guy, I mean, these guys.

I have written this before, but those folks who rev their Harleys at traffic signals are annoying. It’s as if they want everyone at the signal to look at them, in their gray-haired, pot-bellied, leather-clad, Peter-Fonda-in-Easy-Rider moment. They rack up 115 decibels so this $40,000 motorcycle won’t die on them or something? I don’t get it. If I revved my Prius, would I get the same effect?

Those non-Harley speed bikes have their own set of issues, including zipping in and out of cracks in traffic and down the middle of the road at intersections. If you truly want people to “Check twice for motorcycles,” start with training your own. Checking twice only works if you can at least catch it once.

For the record, the thumping bass teenager cars fit into the same category. I see an audiologist in their future, and I’m not sure the vibration is good for their bowels either.

I couldn’t honk at either in this case but there could be a very stern stink-eye coming.

Have you ever gone through three signals with some person who can’t seem to turn their blinker off? Do they go through the rest of their life like this? “Oh, look at the pretty light! Looky-looky-looky.” Modern cars even have alerts for this type of thing, but evidently, they have their Sinatra turned up so loud they can’t hear it. I could honk at this guy but it would be a waste of time.

OK, he’s 25 feet from the intersection and he crosses three lanes to make his last-second turn. Heaven forbid he would be forced to go to the next intersection and make a U-turn, or go around the block, despite the fact that he was the one unprepared. It’s at these times when you’re likely to get your front fender taken off, just because someone can’t be inconvenienced a wee bit.

I’m so astounded, I can’t honk. I make strange guttural sounds instead.

I know many of these complaints are not exclusive to Florida, but year-rounders notice it, especially in-season. We all make mistakes once in a while but jerks have a habit of dancing with the devil every day.