The Florida Great White … No, not Sharks … Egrets

I recently had an opportunity to get up close and personal with two iconic birds of southern Florida. These birds are my favorites. Although, I say that about all birds. There are just so many in Florida, it’s hard to pick an actual favorite. But the white egrets are unbelievably beautiful.

Different white egret varieties (including the Great White Heron) often hang out near each other. So seeing one variety doesn’t assure you are seeing two of the same kind. Egrets are collectively called herons or egrets as they share the same family and the white varieties can be difficult to discern.

The white reddish egret features black legs and feet, white plumage (mostly wet here), and a medium heavy black bill with pink at the base. The bi-coloring in the bill becomes more profound as the bird gets older, with the black tip and rosy base coloring more clearly delineated.

The photo here shows an immature white reddish egret, so the bill is still in transition. Similarities force bird watchers to take an especially close look to spot the reddish egret’s characteristics. It was easy to get that close look because this bird walked right up behind me on a pier, so close that I was startled and had to step backward to get the photos in focus. Some egrets are more sociable than others.

This isn’t a snowy egret because it is taller, lacks yellow feet and lacks any yellow coloring at the base of the beak.

I came up to a couple of great egrets wading in the shallows and got to about 20 yards away. The two were both close but I couldn’t get both in the same shot until they took off.

The great egret is tall with a very long neck and lacks the plumage of the other varieties. It has an orange-yellow, medium-heavy yellow beak and black legs. It is quite an eye-catcher.

The snowy egret is smaller than both the great and reddish egrets. It has a thinner black beak with a yellow base. It also has black legs and distinctive yellow feet. 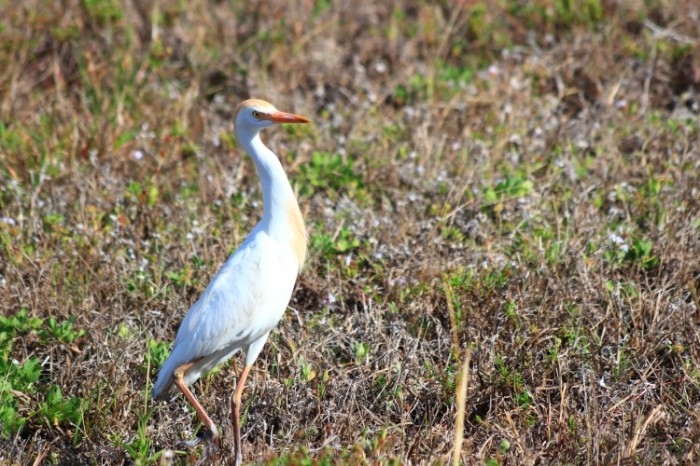 This beauty is so-named because it often hangs out with cattle. It’s kind of a nice symbiotic relationship. They like bugs; cows don’t. The cattle egret is often seen after the mowers come and arrive as a flock, along with ibises. It’s quite impressive seeing them cover a field.

It is fairly common to see all white egret varieties in Florida, including those mentioned above as well as the cattle egret, and great white herons. You just have to visit the places they like to hang out — and they hang out in Florida.