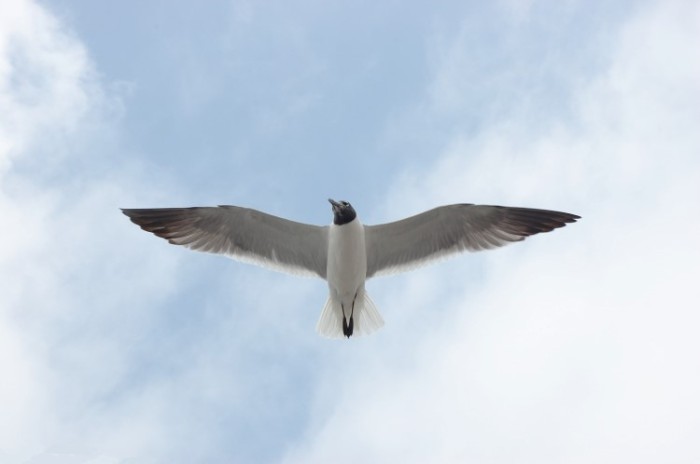 A poem by Kelly Dean

At first I see her sitting all alone upon the dock

I say she’s she, but yes it’s true, a boy she could be too

But based upon her mournful look, I think not white but blue

I seldom see a gull alone without a gull nearby

But this sea dove just sits alone, content to wait — or stay

I wonder many things when I go venture to the bay

I look out on the ocean then invent A Briny Play

I note a crescent fin in black, a dolphin makes his show

But only one appearance means he has some place to go

A Bardly bird, a night heron in burglar’s mask and wisp

Appears in Second Act with stately menace from the mist

And blackbirds flying west in clusters fight amongst the gusts

That ever-present straggler comes in late in breathless thrusts

I see a heron, also black, not white with crooked neck

Make chase across the sky, a ghostly pirate from a wreck

But this lost mariner notes nothing of his gold

It’s just the shining sun across the water flitting bold

I wonder if she’s injured, if her stick-like foot needs mend

But no, she stands erect when needed, cranes for some lost friend

She doesn’t go too far, she only circles overhead

And then returns right back to where she started from instead

And even when some other gulls swoop down for social calls

And in the ocean wind she sometimes breaks her silent stare

By crying out for some companion — sadly — beak in air

I wonder if she has a love, a gentlemanly gull

For whom she posts in vigilance – awaiting — as if null

In only black and white, her feathers truly speak the plot

For in my play her lonesomeness is now a tragedy

And as his graying body slowly sunk to ocean depths

She’ll ever wait and ever circle ‘til her final day

Until such weakness takes its toll, her strength and will do fail

And then she too drops to the waves, her wings now angel’s sails

There lastly meets her lover in eternal water’s nest

To nuzzle one another softly, beaks on feathered breasts

The Third Act of my bayside play complete upon the sea

The clouds come down like curtains, thunder sounds as tympani

I pull my poncho overhead and rush to seek some cover

As not to drown away myself, then maybe lose my lover

And as I glance back over-shoulder at the hapless gull

Yet there she still – undaunted — sits — a Seagull Sentinel