Florida Palm Trees — The Good and the Crabby

Palm trees, along with beaches, are an iconic Florida symbol. One can scarcely see a website about Florida that isn’t covered by them, including this one.

Nonetheless, palm trees don’t grow everywhere in the country, the newly relocating folks can be vexed by their care – and their foibles — and these are seldom discussed online.

But if you’re originally from up north and landscaping your Florida lawn, or perhaps renting, many palm tree varieties have different positives and negatives. Why does it matter? You will likely be calling in the landscapers for some of these trees and it’s nice to know what to expect. If you own palms, landscapers wielding chain saws and pruners are likely in your future.

Sometimes the word “trunk” doesn’t seem to describe skinny palm stalks very well, so I use them interchangeably below based upon their size. I’m not an expert; I’m just experienced.

I really love this palm because it is just so dense and easy to grow. But it has its wicked side. It will grow bushy in no time in the Florida tropics. Each new shoot grows from the base which ultimate gets as big as a car engine. Many people use them as hedges but when they grow unchecked, your neighbor will not only not see your property but will likely assume you were eaten by them.

Areca palms also do the berry thing in the summer too. They are reddish at first, but ultimately get darker and fall to the ground, like a banana bunch. Some bunches stay in the trees — and ferment until they eventually come lose; therefore, many people climb a ladder to cut them down at this point. Why? When the berries ferment, they create a wee bit of an odor that is kind of like a sweet wine mixed with bourbon. It’s hard to call it unpleasant, considering how much Floridian’s drink – nothing that smells like liquid love is ever going to be that unpleasant, but it might annoy a few. Areca’s also produce stalks/trunks from this large base which eventually die, leaving a long, grayish, 15-foot pole sticking out with no fronds attached. And, of course, they do shed palm fronds. Due to the sheer number of trunks, it can be a lot.

Nonetheless, these palms create “instant-Florida” for many folks and are hard to resist, so long as someone else is out there doing the maintenance. Christmas tree palms and dwarf palms are large and small alternatives and generally plated in groups of three. 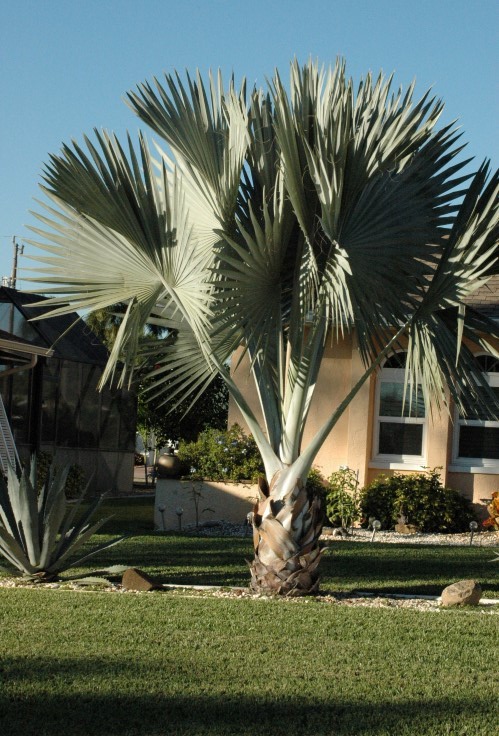 This silver beauty is native to Madagascar apparently but it is certainly a fixture in Florida lawns and landscapes. With its large base trunk and large fronds emerging right out of the base, it can be striking in its cool simplicity. I understand they are a bit more expensive than some other trees so they are keenly an accent plant. They take quite a bit of room so they are usually the corner-piece. Generally, and ideally speaking, one shouldn’t purposely cut fronds from a palm, rather, they should let the fronds fall naturally. Unfortunately, this isn’t possible or practical with all palm trees. The Bismarck is one of them. The rather large fronds, once they get to about 45 degrees need to be cut off with a saw at the trunk to look good and stay out of other nearby trees. The fronds are heavy, so they simply don’t look as good when they are sagging as when they are towering upward.

This is the large and relatively short palm that looks like a pineapple, hence the nickname. No, pineapples do not grow on them. Yes, people ask.

Along with the Bismarck palm, they are generally my favorite. Again, they are another accent tree because they are so full of character: too many would take away from landscaping; too few look remiss. They are frequently the centerpiece of the lawn and are generally well-behaved for a palm, but often need some trimming, similar to the Bismarck when they get unruly. But they are a wonderful palm that just screams “tropics.” 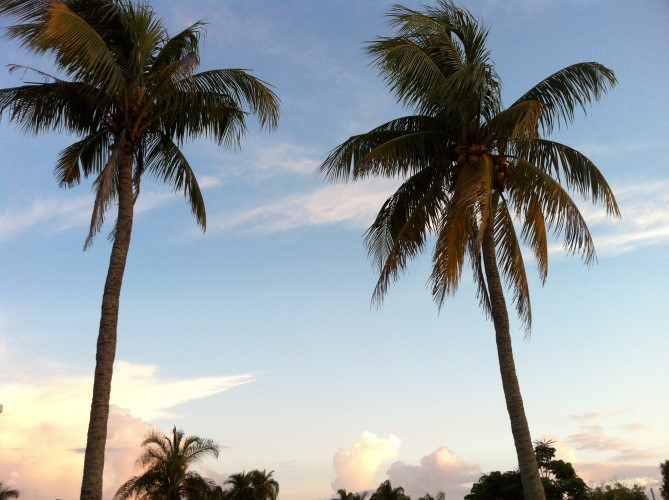 These used to be a staple in old Florida for obvious reasons. They create an instant beach and water image in the mind. As time went on, and other varieties emerged, the coconut tree kind of slipped into the background — somewhat. There are plenty at the beach, bays and boat docks, however. The downside is they are quite tall, spindly, and usually require a hard trimming at the top occasionally. Add to that, they drop 4-pound coconuts each year. That isn’t a big thing, unless your car, boat or personal noggin happens to be under it. Yikes! Fido better pick another tree to use too.

This one, along with the queen palm, has supplanted many land surveyors in Florida because they are usually planted in rows and mark property lines. There is almost nothing about the Royal palm that’s bad, except perhaps the sheer size of their fronds and when they unpredictably fall on the lawn and street.

Along with the stalk, their droppings can be as long as a car. Nonetheless, they feature a long green stalk emerging from the trunk with well-formed fronds up top. They are stunning and will grow very tall. This is why they are so prominent and are generally planted in rows of several.

As an aside, to me, the Queen Palm is like a cross between the Royal’s majestic height and the classic look of the Coconut Palm’s trunk and feathery leaves. 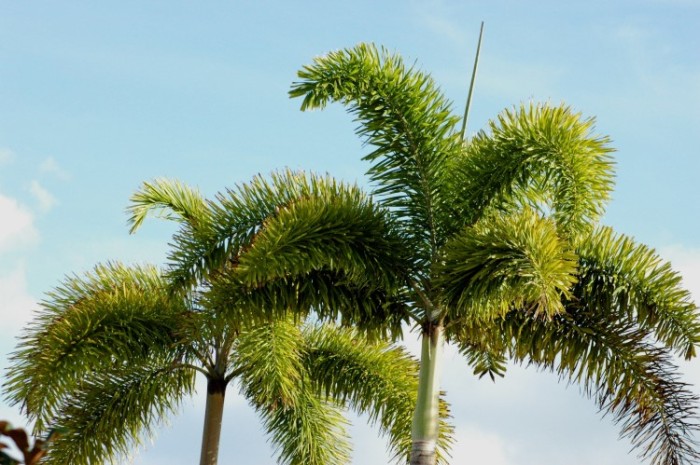 Just like the name sounds, this little beauty  has feathery fronds that resemble the tail of a fox. They are intermediate in height and are often used as transitional palms leading up to a row of royal palms. The royal palms are taller, so the shorter foxtail, with similar trunk, can do a visual lead-up to the extremely tall royal palm. The foxtail is a natural if you don’t desire the mammoth the royal will eventually become.

Although also iconic to new Florida, fan palms, such as Mexican, Chinese and others, are not my personal favorites, but it’s certainly not because they aren’t wonderful, or popular. Many people allow these palm leaves to droop and die, creating a gray skirt of dead palm leaves, which will remain for some time, creating a hula-skirt bulge. It’s a personal taste thing, but I like it when palms reach for the sky, rather than cover their trunks with their “hands.” When they are well-trimmed, leaving a manicured-looking trunk covered in smart-looking, gray leaf bases, then they are charming. 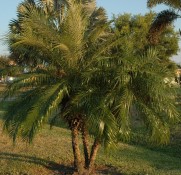 The pygmy palm is usually planted in a group of three specimens and they stay relatively short. They are a very nice palm when space is limited or as a unique-looking accent.

For the purist, Palmetto palm varieties are indigenous to Florida, but saw palmettos are more of a large shrub than a tree. The cabbage palm, which can tower to 65 feet, is quite tall. Saws are frequently the tree you see growing at the base of taller cypress trees on open lots, vacant land and at the side of the road; Cabbage palms are the giants. Saw palmetto palms can grow up to about 30 feet, but they are also about 30 feet wide, so they are not ideal for landscaping. Yet they are entirely natural, and are a joy to see along highways, creating a natural Florida feel and habitat that can be managed in that setting.

Once again, palms help make Florida what it is, but know what you’re getting into if you’re taking care of them. All plants grow quickly in Florida, so know from the start: they will all require attention.

*Editor’s note: Some palms, such as Dwarf Palms and Palmetto shrubs can have long thorns; the saw palmetto literally has a sharp saw. Also, the short, yet attractive Sago Palm isn’t technically a palm and its fruit is toxic to pets. So take note if you have cats and dogs.