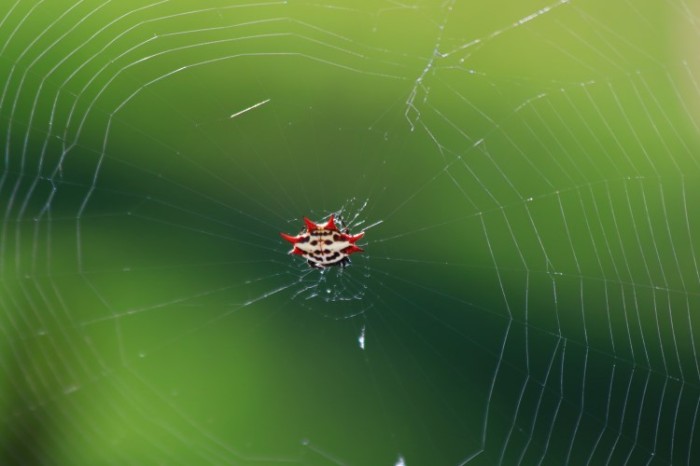 A Spider with a Cool Name: The Spineybacked Orbweaver

There are spiders and then there are scary spiders. Common wolf spiders might be harmless but let’s face it, they are scary as heck. And I know people who will run from a granddaddy longlegs. Spiders can completely change the way people view nature. That’s unfortunate because spiders are nature at nature’s best. Look at it this way: you could hate having the spiders around; you could hate being bitten by flies; or scary spider could eat the biting flies. I would take the latter.

Such is the case with a spider with a terrific name: the spineybacked orbweaver. Locally, we call them “crab spiders.” Somehow, this spider manages to get into areas you don’t expect a spider would care about, but somehow it always seems to be near the water – and this can include webs – or orbs — over your pool and inside the lanai. With this, he has the uncanny ability to clear a pool of its human occupants very quickly as well.

He’s just scary looking. I mean, if it weren’t enough that you can imagine huge teeth emerging from this spider, the spines make you think he can stab you as well. Of course, that’s silly; it’s more of a protection thing than an offensive weapon of mass destruction. Birds think he’s scary too, I suppose.

Anyway, if one of these fellows builds a nest over your pool area or near your dock, remember, you can remove the web and let the critter escape. He will go elsewhere and build his nest overnight on someone else’s property – like a nosy neighbor. Sounds fair.

2 thoughts on “A Spider with a Cool Name: The Spineybacked Orbweaver”