The Mangroves of Florida

People don’t spend much time writing about a tree, unless they’re Joyce Kilmer, so this is good reason to sing the praises of the mighty mangrove, don’t you think?

This tree gets little respect. But the mangrove tree is literally Florida’s arbor of life – the guardian of the beach. Mangroves are so important to Florida’s wildlife, in fact, the entire food chain, that conservationists are going to great lengths to make sure the shoreline remains a happy home for this life-giver.

With about 700 miles of beaches in Florida that means the rest is largely forest, nearly another 700 miles, and that doesn’t include barrier islands. Mangroves only grow along the southern half of coastal Florida, from Cedar Key on the Gulf Coast around to Cape Canaveral on the East Coast. Their habitat is threatened, so it affects everything down the food chain.

Some would say, well if you remove the mangroves, there’s more room for sandy beaches. Yes, that’s true, but there would likely be little desire to go to the beach without the mangrove. Why? It’s because so much of what makes Florida – Florida — is due to the mangrove, which includes wildlife and fisheries preservation as well as sand erosion protection.

The Three Amigos Working Together

There are three species of mangroves in Florida, the red, the black and the white. See? Even the names are innocuous.

The reds are most visible near the water’s edge being the “walking tree” you see with roots literally in the water. The black mangrove is slightly back from the water and only semi-tidal, meaning it spends less time near the water except during spring high tides and occasional floods and storms. They all have a large impact on wildlife, including the white mangrove, which is a wee more inland. The white is a major rookery and flood damper and isn’t far from the water, but it’s not in regular or semi-regular contact with the water, like the red and black mangroves.

The mature red mangrove is the one you see along the shoreline with the ruddy prop roots. It looks like a granddaddy longlegs walking on the water at low tide, except with more legs. It has dark green, oval shaped leaves with a pointy tip. The underside is slightly lighter green.

When you’re hanging at the beach and look down in the shallow water and see a bean-like pod floating in the water, you are looking at a new red mangrove ready to become a tree. This pod is produced and fertilized on the tree then drops to the nearby ground, or in this case, the water. It is then spread to and fro with the tides and currents.

These red mangrove beans will ultimately grow to create safe habitat for countless fish and bird species that serve the food chain of Florida. If there are no small fish, there can be no big fish; in fact, there can be no fish at all if you think about it. Snapper, snook, redfish, tarpon, sea trout, crabs and countless others survive on the baitfish from the mangrove roots and even live among them. If you want to catch fish, go where they eat, live and breed.

Add to that, the mangrove is a rookery for countless sea birds, including pelicans and the funky cormorants, to name but a couple. Without this habitat, they wouldn’t exist either.

This brings me back to the sandy beaches. If there are no mangroves on the shore, then there is little to interest you at the sandy beach. One might as well buy a sandbox and a kiddie pool, put it in the backyard during summertime — and pretend.

The mangrove has the ability to filter water and thereby purify it as well. If a three-layer forest consisting of all three mangrove types is substantial enough, it can dampen flooding and mitigate storm damage as well because it dissipates the water.

The black mangrove is important because it is found somewhat higher on the beach in the semi-tidal and flooded marsh areas. Its roots don’t do the spider legs thing the red mangrove does, but it is very important to areas that flood frequently with brackish water.

The black mangrove can be identified by the pencil-like shoots (pneumatophores) that come up around the tree’s roots, like little fingers. They supply oxygen to the tree. It is simply the inland version of the red and serves many of the same useful functions.

As mentioned earlier, the black’s leaves are usually a bit lighter and a wee less pointy than the red’s, but not always. The two surefire ways to tell it from the red is the aforementioned pencil-like shoots and the light gray color on the underside of the leaves, giving the tree a two-tone look. 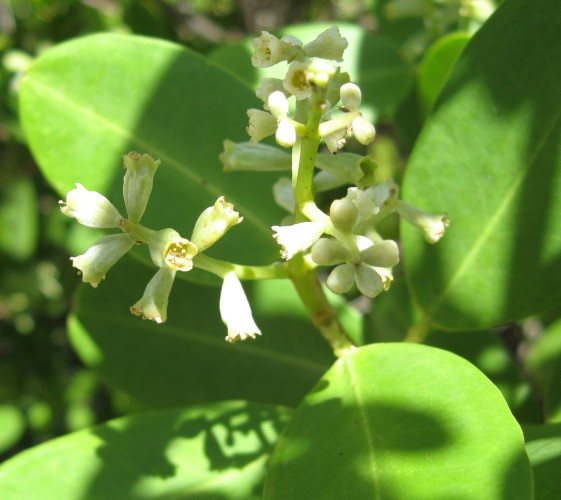 The white mangrove is more inland and, nonetheless, sports the same flood fighting features as the red and black as they are still not far from the water. If, or when, bad storms come, this tree is very important for mitigating that potential damage. So long as they are in sufficient numbers.

The white mangrove has a much lighter yellow-green leaf that is more rounded than oval in shape and it is not pointed. It has two glands at the base of the leaf; it has small white flowers when in bloom; and its seeds look like lima beans — really.

The mangrove manages proximity to seawater by secreting the salt intake though the underside of their leaves. There are just too many cool things about this tree to mention. 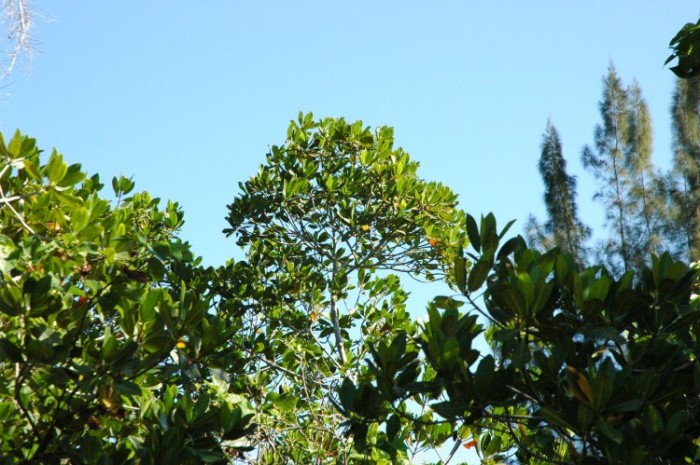 Man is responsible for the lion’s share of the destruction of the mangrove forests through development and introduction of invasive tree species, among other things.

So when your plane goes over the coast, and you’re looking down trying to get a high-level view of the beaches, please stop a second and appreciate the natural beauty of the mangrove forest along the shore as well.

If you relocate to Florida, leave her as she is — she quite lovely. If we preserve these forests, there should be much to enjoy about Florida for many generations to come. Here’s a quick-read if you want more information.