The Unsung Fabulous Falcons of Florida

The glorious white birds of Florida tend to get most of the attention. This is because most people up north have very few exotic white birds hanging out at their local grocery store like we do here. White birds, like the egret and ibis often congregate anywhere they can find a puddle of water.

But the birds of prey have a solitary kind of dignity – perched high and looking down upon us. They are in a different league. They fly around scanning the earth or water looking for prey and then – attack with a vengeance. It’s just cool: nature at its most basic.

There are a couple of falcons that are common to Florida – and common elsewhere — that often fall under the radar in the respect department but are nonetheless great. They might be snowbirds, or seasonal visitors during winter, or they might be here all year-round. They often go unnoticed but deserve some press, so here they are: 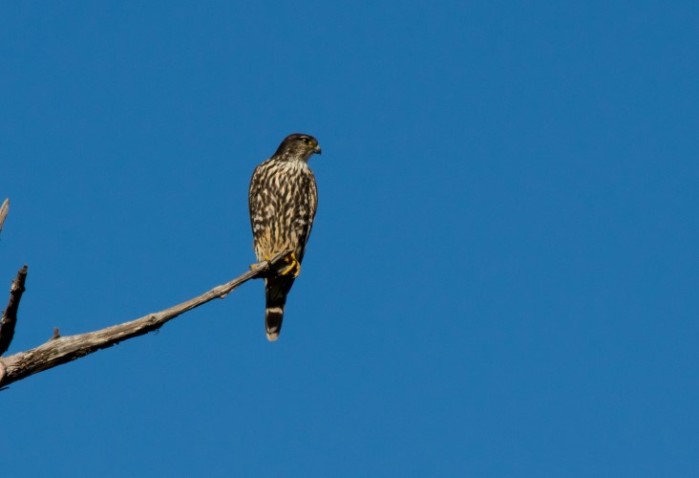 The Merlin falcon is a smallish seasonal visitor that easily catches the eye with its unique and interesting markings. This one staked out his claim to a vacant piece of land near my home. He used his high perch in an old dead pine tree to get a clear look at the land below.

This small falcon is so small, you can easily mistake it for a mourning dove perched on a wire as you walk by. But closer inspection will reveal its almost-peregrine-like mask and talons. That’s no backyard bird. The Kestrel is a common falcon, but anonymity is common among smaller birds, so it is seldom noticed.

To distinguish birds of prey from backyard birds when flying, regardless of size, I look at how they fly and act in the air. Falcons will flap their wings more intermittently, where the larger hawks, eagles, and osprey and the like tend to soar more with wings spread, using the wind currents. Falcons also have more v-shaped wings which enable them to dive, maneuver and fly more quickly than their prey.

These smaller falcons tend to hunt small birds about their size, often swooping in on a small flock of grackles as they fly by. The kestrel is so small, he blends right in with other birds to the naked eye, but if you watch more closely, he’s actually the one darting in and out of the flock, actually hunting them. They don’t turn their beaks up toward rodents as well, but when they hunt in the air is when they are a sight to see.

You can read about the big birds of prey, the osprey here – or even the bald eagle here and here. The swallow-tailed kite is also an impressive bird, getting it’s due here. This article is about the lesser-known carnivores. I thought they needed a little attention.