The Invaders of Florida, Part 2

In Part 1 of Invaders of Florida, I wrote specifically about two species of trees that have made their presence well-known in Florida: the Australian pine and the Brazilian pepperplant. But plants aren’t the only invasive species in Florida, there are animals sneaking in as well – okay, they are not sneaking in, they are being brought in.

The Burmese Pythons and Boa Constrictors

I can’t be kind here. Guys who thought they were cool bought a python to show his coolness among his friends. But when he was forced to move, change jobs or simply grow up, he was left with an oversized reptile to deal with. Too many of these guys simply went out to the freaking Everglades to release these animals into the wild. It seems they just didn’t have the heart or resources to take care of them properly.

Now, they are a problem for wildlife especially alligators and birds, some endangered. They’ve become such an issue that Floridians can legally get permits to hunt pythons in an effort to eradicate them from the Everglades and other state parks. They are illegal to own in Florida; they can no longer be imported into the U.S. and cannot be taken over state lines.

I have personally witnessed people releasing wild animals back into the wild when they became a burden, and that is wrong. There are theories that a breeding facility might have accidentally released them during hurricane Andrew, but I find this dubious. They have been sighted in the glades since the 80s. Hurricane Andrew was in the 90s.

The pet shop shopper strikes again. But first, I’d like to tell a story. I have been to Mexico frequently. I once went to Mexico and found there were of plenty of free-roaming iguanas for picture-fodder to send back home. They were kind of cool. The next year, I went and there were virtually none to be seen. That previous year, local authorities had made a decision that the iguanas were out of control and made steps to lower the population. I won’t go into the details, but it worked, evidently.

Iguanas are not totally out of control in Florida, but they are considered invasive species and not welcome in the outdoors. They are thrown into the competitive environment among other animals and this throws off the natural balance. They have no trouble breeding and adapting to Florida, but will populate to extremes if they don’t have natural enemies.

If you can’t care for a pet, please don’t buy one. Think about the future. Sometimes, releasing the pet is just not responsible – or legal. Let’s not do what Mexico had to do. 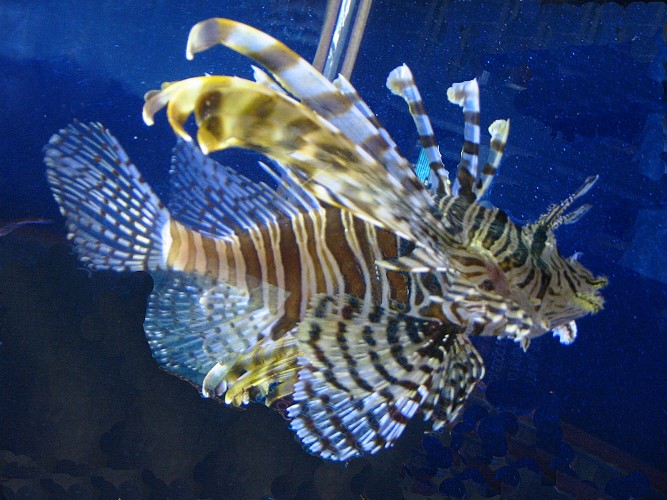 The Lionfish is a native of the Pacific waters but can adapt quite well to the warm Atlantic waters as well. These fish appear because people drop aquarium fish into the ocean as a solution for dealing with exotic fish they can no longer manage. This is sad because it causes so much of a problem for fisheries and wildlife management in Florida that they encourage lion fish catches among divers and fishermen. This hardy-eating, venomous fish is quite a problem in the Keys.

It’s true some invasive species enter the county through intercontinental commerce, in packing crates, shipping containers and the like. Inspection diligence can go a long way toward solving this particular problem. However, we can solve the feral animal problem buy not releasing pets into the wild.

There are areas of Florida like none other in the world. Life in the wild is hard enough; we don’t need to add to the difficulty. My impression is that people who live in Florida truly care and are making changes.